When most people think of food in aged care, they think of bland boring food, but MercyCare Maddington Residential Aged Care head chef Barb Johnson says it doesn’t have to be that way.

Chef Johnson, who has worked as a chef for 34 years and as a chef in aged care facilities for the past decade brings a huge amount of passion to what she does.

When she started at the facility which specialises in providing care and support to residents living with dementia, in mid-2018, she initiated a whole new approach to the food that was served.

Chef Johnson put together a four-week meal plan which provides a huge amount of variety for the residents with a focus is on creating home cooked meals from scratch.

“There’s tiramisu for dessert, there’s French lamb cutlets, we have a noodle dish that they love, and they really enjoy the sweet and sour pork dish which has all the flavours of the traditional dish but is baked rather than fried, to keep it healthy,” she said.

Other than the crowd-pleasing meal of fish and chips, which appears on the menu more than once, residents will not eat the same meal twice during the month.

When creating the menu, Chef Johnson had to carefully balance the amount of dairy, carbohydrates, protein, fibre and sugar in each meal and have it approved by a dietician.

MercyCare Residential Aged Care Director Margaret Ingleton said that “many people may not be aware that people in the later stages of dementia usually lose weight which can be detrimental to their immune system and put them at risk of falls. Since the new menu was introduced in July, 75 per cent of residents have had stable weight gains, which is a fantastic outcome”.

The facility has also reduced the need to use food supplements by a whopping 75 per cent since the residents’ diets changed as they are now eating more of their meals and getting more of the nutrients they require.

“A certain amount of supplement use will always be a necessary reality for some people with dementia but if we can be providing as much nutrition through home-cooked food that the residents look forward to eating, of course that’s preferred,” Ms Ingleton said.

Chef Johnson said she loved getting feedback from resident’s family and friends.

“Some of them have come to me and said when they took the lid off the plate they wanted to eat the food themselves,” she said.

In one day Chef Johnson prepares 150 main meals and 150 snacks, she personally checks how the residents are enjoying their meals and accommodates special requests.

She admits working in an aged care kitchen rather than a restaurant means she has a greater responsibility to those she is cooking for, which makes her job far more complex, but she wouldn’t have it any other way.

“I figure if I cook my meals with love, it’ll reflect out there in the dining room, after all, it might be me in the nursing home one day.”

Her background in aged care kitchens means Chef Johnson has a good understanding of the people she is cooking for.

She and her team individually plate each person’s meal.

While the same meal is cooked for each resident, that meal must be prepared in three different textures to match the needs of individuals.

Chef Johnson also plates up different portions according to people’s preferences as sometimes people with dementia may refuse to eat for reasons as simple as having too much food on their plate.

She also uses a number of different types of plates, some have lips to allow those who have difficulty using cutlery to be able to feed themselves and others are red to provide visual assistance for people to see the food on their plate better. 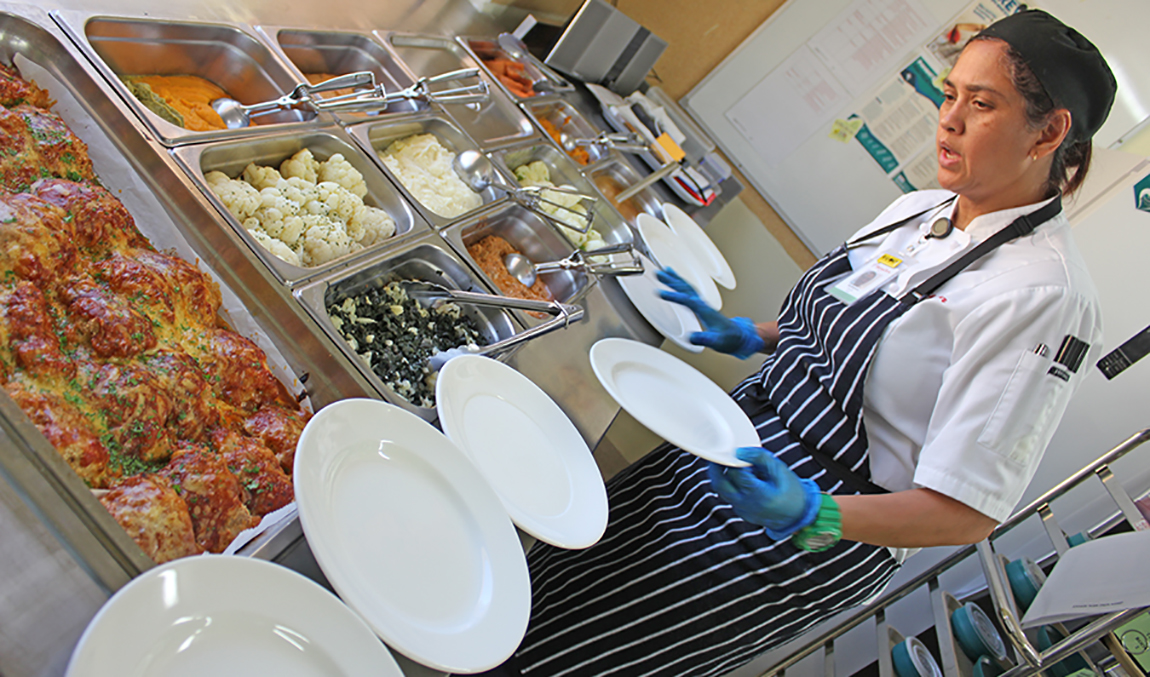