Skip to content
Close Search
There wasn’t a dry eye in the house when a talented string quartet from the West Australian Symphony Orchestra put on a moving ensemble performance at MercyCare Kelmscott Residential Aged Care Home this month. 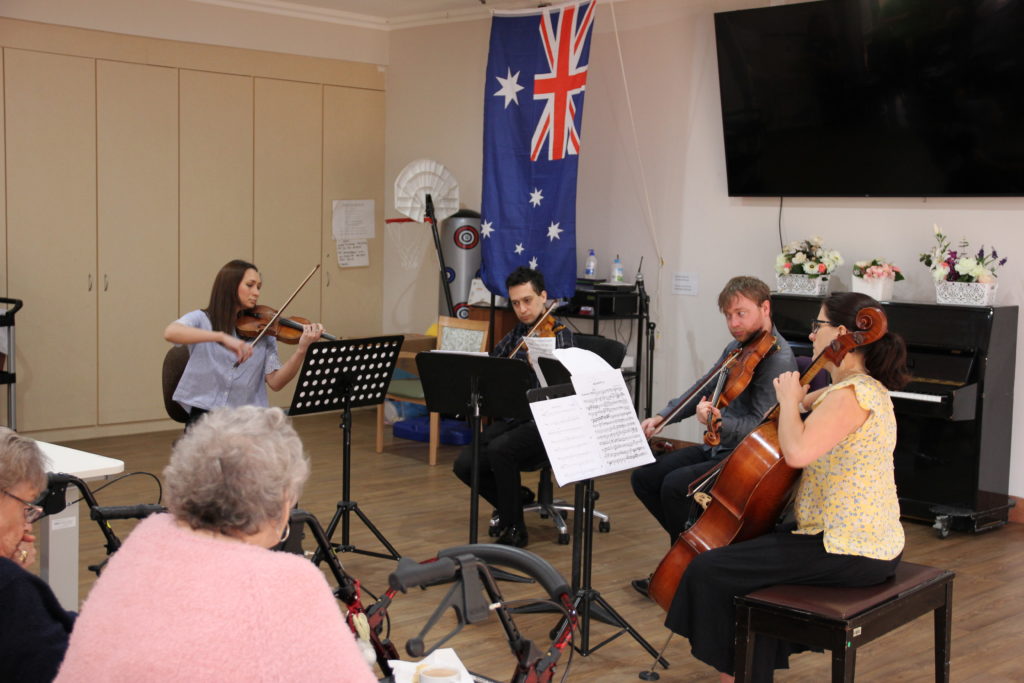 Studies have found music can be powerful therapy tool which can trigger fond memories, bring a sense of calmness and improve cognitive function for older people, particularly those who live with dementia.

The ensemble regularly performs for older people in aged care settings as part of WASO’s free Music for the Ages program, which aims to bring the beauty and emotion of the chamber ensemble experience to those who can’t attend a concert in person.

During their moving classical chamber performance, the quartet played a range of classic musical pieces such as Salut D’Amour and Felix Mendelssohn’s Quartet No. 2 in A minor, as well as a tear-jerking rendition of Moon River, famously known from the 1961 Audrey Hepburn film, Breakfast at Tiffany’s.

MercyCare Kelmscott’s Service Manager Naomi Scott said WASO’s visit touched the hearts of many residents and staff at Kelmscott who came together to watch the intimate performance.

“It was a beautiful performance enjoyed by everyone here at Kelmscott, residents and staff alike,” she said. “We love connecting with the community and bringing these sort of experiences to our residents. It is wonderful that WASO brought their phenomenal talents to our home for the benefit of our residents.”

Among those in the audience who were moved by the musical rendition was resident Angela, who recalled fond memories of her musician father, who had performed with WASO during the 1980s.

“It was such a magical experience, the residents really enjoyed it,” Tracy said.

“When they played Moon River, I don’t think there was a dry eye in the audience. We have a few residents here at Kelmscott who have come from musical backgrounds, so they were really excited to hear WASO perform.”