Skip to content
Close Search
How one woman's love for her mother and knitting led her to volunteering.

When Junell’s mother Hilda moved into residential aged care after a stroke, Junell ended up spending quite a bit of time at the facility.

She was there most days, talking to her mum, helping to feed her, or just sitting with her.

She’d often bring knitting needles and wool in with her.

Hilda who had been a dressmaker no longer had the movement in her hands to knit herself but was always happy to see her daughter and watch the progress of her latest knitting project.

Other residents also showed interest in Junell’s knitting, so much so that the manager of the facility asked if Junell would like to start a regular knitting group for the residents.

Junell’s mother sadly passed away about four years ago but Junell has been holding weekly knitting sessions with ladies at the centre for more than five years.

The knitting group provides a casual get together for people to chat, laugh and be creative.

“It’s relaxing and it’s also therapeutic for them, it keeps the mind active and provides a sense of achievement as they can see their pieces progressing,” Junell said.

The movement involved in using a knitting needle or crochet hook is also a good way for older people to keep their hands and fingers active, preserve dexterity and ward off the effects of arthritis and osteoporosis.

While it is a knitting group, Junell admits there is no rule that people must knit.

“A lot of people say they don’t knit anymore, so they just come to sit and talk, and after a while they pick up the knitting needles and get into the knitting,” she said.

As well as working on items such as scarves and blankets for friends and family, the women create items that are sold in the foyer of the centre, with funds going back into knitting equipment and the facility itself.

“Our volunteers are a vital and integral part of our organisation,” she said.

“They undertake everything from running knitting groups to gardening or playing music for the elderly, there are so many ways people can assist.” 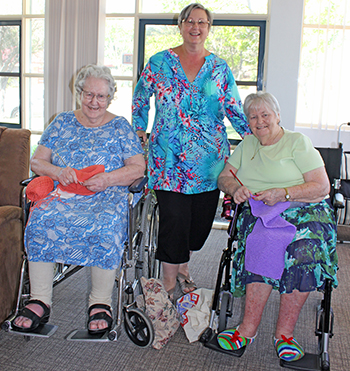