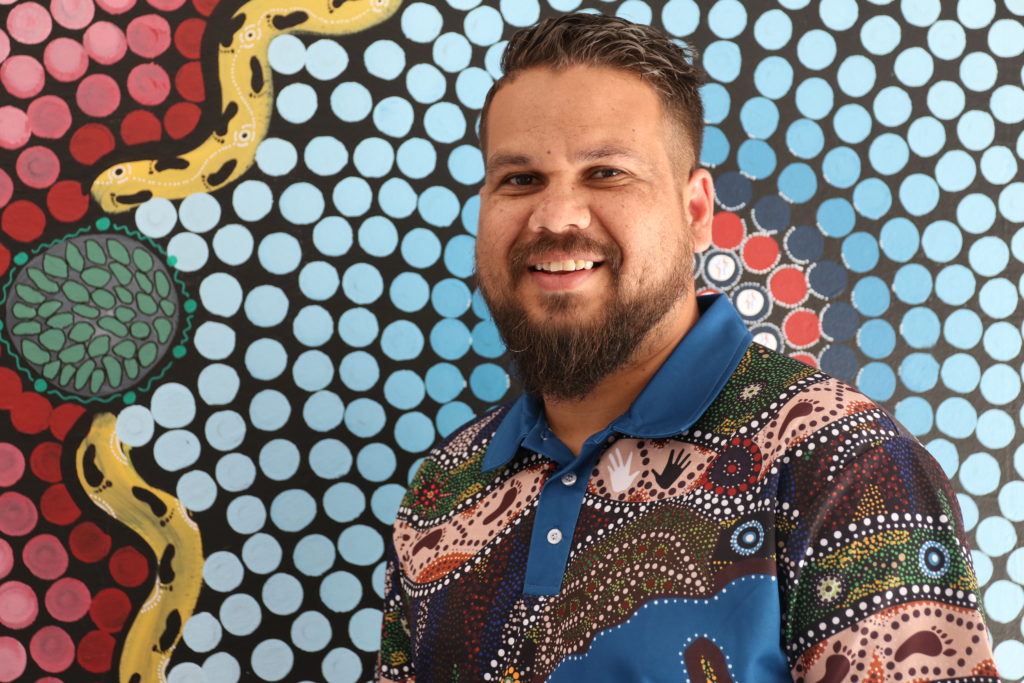 MercyCare Aboriginal Practice Lead Chris Ryder was awarded Community Person of Year at the 2021 NAIDOC Perth Awards in recognition for his outstanding work.

Chris said receiving the award this week was a tremendous honour.

“The award gives me recognition that the work that I’m doing is being noticed,” Chris said.

“Because I don’t often take a step back to look at the bigger picture, so this award actually reminds me to do that and look at where I’ve started to now.

“Whilst I’ve been in this the whole time, I hadn’t taken real notice of the big change that has happened over the space of three years.”

The NAIDOC Perth Awards recognise and acknowledge outstanding Aboriginal and Torres Strait Islander people, organisations and businesses who have made a significant contribution in the Perth community.

Chris joined MercyCare in 2015 as a Case Manager overseeing several homes in the Family Group Homes program and supported young people’s challenges and triumphs within the program, before being promoted to the role of Aboriginal Practice Lead in November last year.

“For the first five years of me being here, I was a Case Manager out in the group homes, which in itself is a very difficult role,” Chris says.

“On top of that, I was supporting colleagues and other staff members with the best practice and support that we can provide our Aboriginal young people that what will set us up to be better in the future.

“Before I joined MercyCare, I was at Noongar Patrol working within the community and a lot of that was working with Aboriginal people with mental health, drug addiction and homelessness in the Perth CBD area.

“I also worked in an Outcare program which was targeted at first time offenders in the Perth children’s court being diagnosed with mental health conditions and assisting them with psychosocial needs and supporting them to clinical appointments and assessments.”

Chris has also worked with Aboriginal youth in out of home care who were faced with mental health challenges.

Drawing from his previous work experiences, in his role as Aboriginal Practice Lead Chris is working with MercyCare’s Executive Director of Mission and Ethos Vicky Gonzales Burrows and Aboriginal Consultant Lorraine Woods to further develop the organisation’s RAP plan both now and in the future.

“For as long as I’ve been here, I’ve been involved with the Reconciliation Aboriginal Pathway (RAP) in different sub committees and working groups towards that, where we all can meet in a smaller group and discuss different issues,” he said.

“That’s where some of the changes have come from across the organisation.”

On what he values most about working at MercyCare, Chris says he has been humbled by his team’s comradery and willingness to hear one another’s ideas.

“I feel like everybody’s voice does get heard. Everybody’s opinion is valued and taken on board and we work through it together as a team,” he said.

Chris believes NAIDOC Week is about celebrating Aboriginal culture with all Australians but says this year’s theme ­– Heal Country – is a reminder for all of us to make peace with the place in which we live.

“Healing Country isn’t just about the land, it’s about healing each and every one of us no matter if you’re Aboriginal or not,” he says.

“It’s about finding peace in the place where we are at, no matter if you’re in this country or in another country.”