Skip to content
Close Search
Volunteer English teacher gets a kick out of connecting people to their communities.

She wrote them on the chalkboard and read them out as a way of introducing herself to the class of mostly migrants and refugees.

In that first class the students introduced themselves in a similar fashion.

That was more than five years ago.

Since that first class, Mitzi (and her students) have learnt a lot.

Teaching English to people who have spent most of their lives with little or no knowledge of English can be challenging but Mitzi says it is a rewarding way to spend a couple of hours each week.

“Some people in my classes may have been farmers living from day to day with no knowledge of English. Others may have been well educated and learnt English in school just to get here to find the English they learnt in classes is nothing like the English spoken everyday in Australia,” Mitzi says.

One of the best things about seeing people gain an understanding and ability to speak English, according to Mitzi, is seeing people’s confidence grow.

One of the exercises Mitzi gets her students to do as part of the learning process is to call her on the telephone and get them to tell a story for 30 seconds.

“Even if it’s broken English, they can get their message across, which is so great.”

Mitzi said a random encounter in a stationery store reminded her about the value of language and the work she does as a volunteer.

“I heard someone calling my name in an African accent and I thought, I don’t know anyone here in Joondalup, who could that be,” she said.

When Mitzi turned around she saw one of the women who’d previously been in her English class who was now able to confidently call out to Mitzi, hold a conversation in English and explain that she was working at the store as a cleaner.

“To know that she’d been able to grasp the language and was now employed and making the most of life, it was such a great feeling,” Mitzi said.

It takes commitment to be able to speak a reasonable level of English if it is not a person’s first language.

Mitzi says a lot of the people in her classes might speak English in the class then go home to a family who communicates the way they always have, in their mother tongue.

But improved technology has made taking the lessons home to continue the learning process much easier for her students.

“Many of them have smartphones like you and I, so I get them to take photos of the lessons on the board to go over when they have time,” Mitzi said.

Her classes have also given Mitzi a greater perspective on people’s unique situations when they arrive in Australia as migrants or refugees.

She says learning a little about people’s backgrounds erased any negative stereotypes that she had heard repeated in society.

Mitzi said Australians need to understand that learning a new language is not easy, especially for those who have had difficult past experiences and were still facing obstacles here in their new home.

She said her classes also had additional positive benefits for those who took part.

“Just coming to class each week can be good for people’s mental health, we keep it social and light-hearted and people enjoy interacting.”

Dedicated volunteers have always been an integral part of MercyCare services. They work across all areas of our organisation including our community support program which runs English classes. 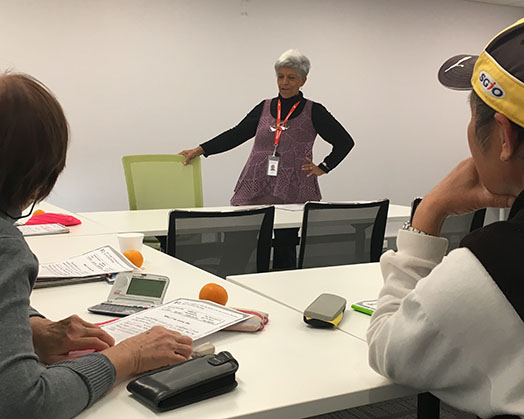