Skip to content
Close Search
Thursday is MercyCare Day for Bill and Dot.

Perth couple Bill and Dot started volunteering their time at St Joseph’s orphanage in 1964 and have spent almost every Thursday since, giving their time to others as part of work done at MercyCare’s Wembley site.

At the age of 89 and 85, Bill and Dot, who love to have a laugh and always find something to smile about, are still volunteering.

Bill initially got involved at St Joseph’s Orphanage, run by the Sisters of Mercy, as a way of helping his friend Norm who volunteered in the mornings and afternoons working on the boiler in the laundry.

Bill and Dot had their own milk-round in Wembley at the time, which involved Bill working from midnight to just after sunrise each day, so he offered to do the afternoon shift on the boiler to give Norm a bit of a break.

Around the same time, Bill and Dot started using their milk truck to pick up food donations for the orphanage.

“We used to go to Fremantle, down to Mills and Wares and get the biscuits, the ones that were a bit overcooked or something like that, then we’d drive down to South Fremantle to the Potatoes Board and they used to give us potatoes,” Bill said.

Dot also got involved in sewing sessions with some of the Sisters, making items to sell to raise money.

For close to 20 years, Dot spent a day a week sewing everything from cushions to children’s clothes and toys.

“The last Sunday in November was called Gift Sunday, so they had a huge fete, it was a really big deal to have a stall selling handmade stuff you had to work all year,” Dot said.

Things did not end there; over the years, Bill and Dot’s volunteering took may different forms.

Bill spent many years driving a bus for the Sisters, picking up and dropping off children who attended childcare and taking aged care residents on outings.

At one stage Dot was asked to take minutes for a few months for one of the boards operated by the Sisters.

The few months turns into years and Dot ended up volunteering with the board for eight years.

The couple have fond memories of helping with the annual Christmas raffles, where they packed a huge stocking around Perth for fundraising.

Bill has also helped out Father Christmas by donning a red suit for children and aged care residents for countless Christmas parties.

After owning their milk-round for 40 years, Bill was employed at Wembley in maintenance for about 10 years until he retired in 1994.

“I’d be working there during the week and volunteering on the weekend,” he said.

Both Bill and Dot’s mums both lived out their final years at the Residential Aged Care facility in Wembley, so much of their volunteering was focused there during that time.

Bill and Dot have seen many changes at the Wembley site, not only in the buildings but the work done in them.

Bill and Dot no longer refer to the Wembley site as ‘the orphanage’, since the establishment of the not-for-profit organisation that came out of the foundations of the Sisters of Mercy’s work, Thursdays have simply been ‘MercyCare day’.

“That’s our Thursday, nobody ever asks us to do anything on a Thursday because they know we’re not available,” Dot said.

After 40 years living in Wembley, Bill and Dot downsized and moved to North Beach but they still make the trip to Wembley every Thursday.

The couple said their good-health had allowed them to continue volunteering for so long. They have built relationships and connections with volunteers, staff, the Sisters and the people who used the services at Wembley over the years, making many dear friends.

These days they spend their time helping out in the early learning centre.

“Bill likes pottering around up there, all the leaves blow around in the playground and the kids throw sand everywhere and the kids all like him and like to watch him sweeping and raking,” Dot said.

“He’ll mend their toys and anything else that the staff need him to do and there’s always some little one who’s not a having a good day up there, so I take charge of that one, it’s just nice,” she said.

Bill and Dot are modest when talking about their contribution to MercyCare.

“We’d been taught – you don’t think only of yourself,” Bill said.

“We’ve got a lot out of it, people we’ve met along the way are fantastic, it’s been a great trip, it’s been really, really good,” he said.

Dedicated volunteers have always been an integral part of MercyCare services, they help to strengthen and add value to the quality of service we provide to West Australians and their families. 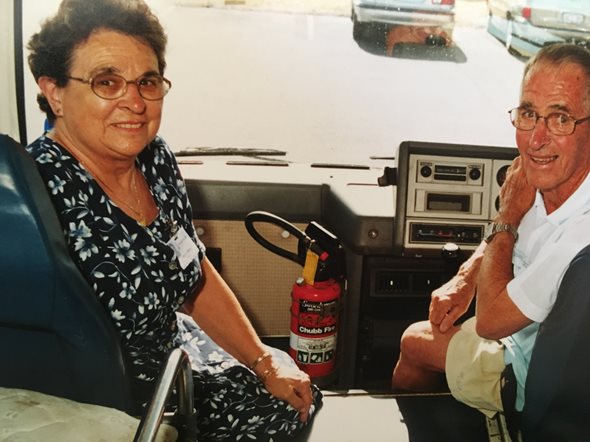 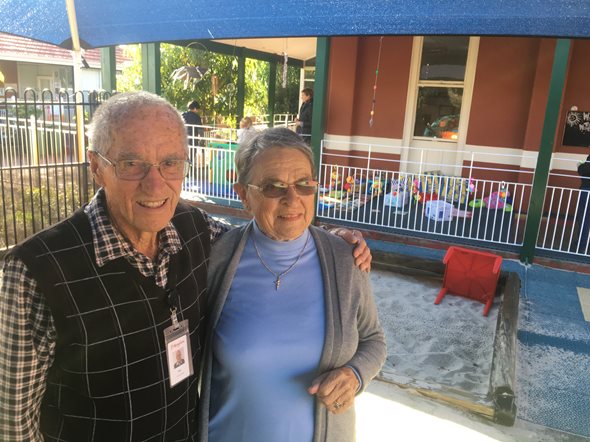